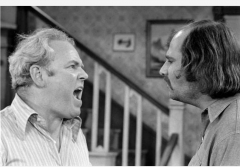 (Photo by CBS via Getty Images)

(CNSNews.com) - Rob Reiner, who played Archie Bunker’s son-in-law (“Meathead”) on “All in the Family” and went on to become a Hollywood movie director, put out a tweet on Monday saying that President Donald Trump is a “lifetime Criminal.”

“He has broken Federal Law every day of his Presidency,” Reiner’s tweet continued. “So when he issues pardons, you just know he’s getting a cut of the action. A Criminal right to the very end.”

Reiner explained in a 2012 interview with the Huffington Post that he does not practice a religion.

“[Y]ou once mentioned to Bill Maher that you have no religious affiliation,” a Huffington Post interviewer said to him.

“Yes,” Reiner responded. “It’s interesting that you should mention the Buddhist thing, because it’s the one religion that kind of makes sense to me. I don’t believe in organized religion, but I do believe in a lot of the concepts of Buddhism. I’m not a practicing anything, but those things make sense because it’s all about how you find spirituality inside you and how you treat others. It’s all about finding meaning. That’s what life is all about.”