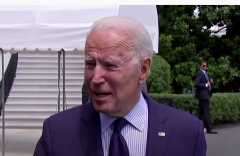 At the White House press briefing on Thursday, Surgeon General Vivek Murthy joined White House Press Secretary Jen Psaki to talk about the “advisory” he had published that day about “health misinformation”

“Health misinformation is false, inaccurate, or misleading information about health, according to the best evidence at the time,” Murthy said at the briefing. “And while it often appears innocuous on social media apps and retail sites or search engines, the truth is that misinformation takes away our freedom to make informed decisions about our health and the health of our loved ones.

“During the COVID-19 pandemic, health misinformation has led people to resist wearing masks in high-risk settings,” Murthy said. “It's led them to turn down proven treatments and to choose not to get vaccinated. This has led to avoidable illnesses and death. Simply put, health [mis]information has cost us lives.”

Murthy said at the briefing that one of the administration’s recommendations for dealing with health misinformation was to ask technology companies to “take action against misinformation super-spreaders.”

At the briefing, a reporter asked Psaki if the administration had “been in touch” with any of the tech companies about this.

“Can you talk a little bit more about this request for tech companies to be more aggressive in policing misinformation?” a reporter asked. “Has the administration been in touch with any of these companies and are there any actions that the federal government can take to ensure their cooperation, because we've seen, from the start, there's not a lot of action on some of these platforms.”

“Well, first, we are in regular touch with these social media platforms, and those engagements typically happen through members of our senior staff, but also members of our COVID-19 team, given, as Dr. Murthy conveyed, this is a big issue of misinformation, specifically on the pandemic,” Psaki responded.”

“In terms of actions, Alex, that we have taken--or we're working to take, I should say--from the federal government: We've increased disinformation research and tracking within the Surgeon General's office,” she continued.

“We also created the COVID-19—the COVID Community Corps to get factual information into the hands of local messengers, and we're also investing, as you all have seen in the president's, the vice president's, and Dr. Fauci's time in meeting with influencers who also have large reaches to a lot of these target audiences who can spread and share accurate information,” she said.

“There are also proposed changes that we have made to social media platforms, including Facebook, and those specifically are four key steps,” she said.

“One, that they measure and publicly share the impact of misinformation on their platform,” she said.

“That will help us ensure we're getting accurate information to people,” Psaki said. “This should be provided not just to researchers, but to the public so that the public knows and understands what is accurate and inaccurate.”

“Second, that we have recommended--proposed that they create a robust enforcement strategy that bridges their properties and provides transparency about the rules,” said Psaki.

“So, about--I think this was a question asked before--there's about 12 people who are producing 65 percent of anti-vaccine misinformation on social media platforms,” Psaki said. “All of them remain active on Facebook, despite some even being banned on other platforms, including…ones that Facebook owns.

“Third, it's important to take faster action against harmful posts,” she said. “As you all know, information travels quite quickly on social media platforms; sometimes it's not accurate. And Facebook needs to move more quickly to remove harmful, violative posts--posts that will be within their policies for removal often remain up for days. That's too long. The information spreads too quickly.

“So, these are certainly the proposals. We engage with them regularly and they certainly understand what our asks are,” she said.

As reported by Fox News, Facebook issued a statement after President Biden made his remark in response to the reporter on Friday.

"We have partnered with government experts, health authorities and researchers to take aggressive action against misinformation about COVID-19 and vaccines to protect public health,” said the Facebook statement reported by Fox. “So far, we have removed more than 18 million pieces of COVIC misinformation, removed accounts that repeatedly break these rules and connected more than two billion people to reliable information about COVID-19 and COVID vaccines across our apps."