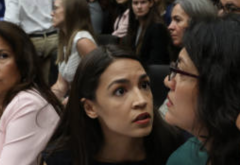 “Facial recognition technology is racist,” Tlaib said in her tweet.

“@CityofDetroit must acknowledge that in an over 80% Black city this type of surveillance is harmful,” she said.

“Read the studies that show how racist and flawed it is,” she said—with a link to an article at the ACLU website.

“Last week, IBM, Amazon, and Microsoft announced they would pause or end sales of their face recognition technology to police in the United States. The announcement caught many by surprise. For years, racial justice and civil rights advocates had been warning that this technology in law enforcement hands would be the end of privacy as we know it. It would supercharge police abuses, and it would be used to harm and target Black and Brown communities in particular.

“But the companies ignored these warnings and refused to get out of this surveillance business. It wasn’t until there was a national reckoning over anti-Black police violence and systemic racism, and these companies getting caught in activists’ crosshairs for their role in perpetuating racism, that the tech giants conceded — even if only a little.”

Edward’s tweet said: “Breaking: It will be illegal for nearly all Virginia law enforcement agencies to use facial recognition technology starting July 1.” This is because of language inserted by Democratic Gov. Ralph Northam into a bill recently passed by the Virginia state legislature.