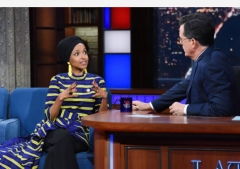 Rep. Ilhan Omar made an obvious mistake in basic English grammar in a tweet she sent out on Monday afternoon.

She used the noun “abolition,” when she should have used the verb “abolish.”

Shortly after she sent the tweet with the grammatical error, Omar tweeted out a correction—apparently lamenting that Twitter did not allow her to correct her mistaken tweet.

“Holding people in prison for hundreds of dollars in cash bail is immoral,” Omar said in that initial tweet.

“Abolition it!” she said.

She obviously meant to say: “Abolish it!”

Her initial “Abolition it!” tweet forwarded a link to a story from In These Times. That story carried a headline that said: “Innocent Until Proven Wealthy.” The subhead said: “America’s cash bail system criminalizes poverty and exacerbates racial inequality. Illinois abolished it. Other states should, too.”

Omar earned a bachelor’s degree in Political Science and International Studies from North Dakota State University. In a question-and-answer sheet posted on the North Dakota State University website, Omar was asked: “How did NDSU prepare you?” She responded: “NDSU provided an open and tolerant learning environment in which I was able to form my own independent and informed opinions with the help of a great faculty, student body and curriculum.”