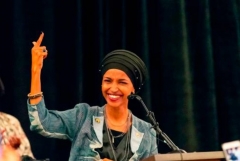 Rep. Ilhan Omar (D.-Minn.) sent out a tweet on Sunday wishing: “Happy Easter to all who are celebrating it around the world.”

She then sent out another tweet that said: “It’s Sunday and I should have slept in but I am gonna wake myself up for this interview, kinda smile.”

The interview Omar was referring to was with Jake Tapper, host of CNN’s State of the Union.

At both the beginning and end of this Easter Sunday interview, as transcribed by CNN, Tapper wished Omar an “early” happy Ramadan.

The Old Farmer’s Almanac explains Ramadan as follows: “Ramadan is the ninth month of the Islamic calendar. It is considered a holy month that honors the time when Allah, via the angel Gabriel, revealed the first verses of the Qur’an, the holy book of Islam, to a caravan trader named Muhammad.”

This year, it will start on April 12.