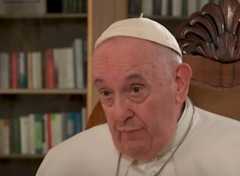 In an interview this week with the Associated Press, Pope Francis reiterated the Catholic position that homosexual behavior is a sin.

The Associated Press published the pope’s statement in an article that carried the headline: “The AP Interview: Pope says homosexuality not a crime.”

The first two paragraphs of the AP story said: “Pope Francis criticized laws that criminalize homosexuality as ‘unjust,’ saying God loves all his children just as they are and called on Catholic bishops who support the laws to welcome LGBTQ people into the church."

The story continued: “‘Being homosexual isn’t a crime,’ Francis said during an exclusive interview Tuesday with the Associated Press.”

Sixteen paragraphs into its story, the Associated Press reported the following:

“On Tuesday, Francis said there needed to be a distinction between a crime and a sin with regard to homosexuality.

The Catechism of the Catholic Church says that homosexual acts are “intrinsically disordered.”

“They are contrary to natural law,” says the Catechism.

“Under no circumstances can they be approved,” it says.