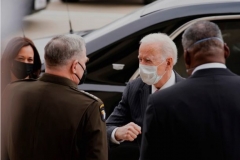 Former Vice President Mike Pence, who is now a distinguished visiting fellow at the Heritage Foundation, visited the D-Day beaches of Normandy last week and wrote an op-ed sharply critical the way President Joe Biden has managed the U.S. withdrawal from Afghanistan.

“The Biden-Harris administration was warned that the withdrawal of U.S. forces ran a terrible risk of handing victory to the Taliban,” Pence wrote in the op-ed published by The Daily Signal. “For all intents and purposes, it appears the administration planned nothing. Now they are improvising a tragedy.”

Pence contrasted this to the detailed planning—and cooperation with allies that went into the D-Day operation.

“D-Day was made possible by careful planning,” said Pence. “With the assistance of our British friends, we built pipelines under the ocean, vast artificial breakwaters, and landing craft by the score. The entire armada of liberation was organized down to the final bolt on the last Jeep.”

“The triumph of D-Day began at the top. Eisenhower knew that we could not win the victory alone,” said Pence.

“He worked hard to bring unity to the allied armies under his command. Above him stood President Franklin D. Roosevelt and British Prime Minister Winston Churchill, steely leaders determined to see the fight through,” Pence wrote.

“Where is that unity and determination today?” asked Pence. “With its chaotic withdrawal from Afghanistan, the Biden administration has infuriated the allies who willingly joined us in battle. It has abandoned American citizens who remain trapped in and outside of Kabul. And it has betrayed countless Afghans who risked their lives to help us.”

“Witnessing the unfolding tragedy of the Biden administration’s disastrous withdrawal from Afghanistan, I could not help but reflect on the differences between American civilian leadership then and now,” said Pence.

“The story of D-Day is one of bravery and brilliance. Meticulous planning made it possible to launch the largest armada in history,” said Pence. “We had the incomparable leadership of Gen. Dwight D. Eisenhower. Our allies—from Britain to Canada to Poland—fought alongside us.

“But above all,” Pence said, “there was the courage of our servicemen who charged those beaches.”