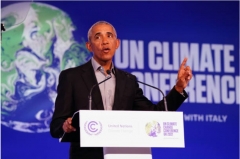 Former President Barack Obama used the first person singular pronouns “I” and “me” 56 times during the speech he delivered on Monday at the COP 26 United Nations Climate Change Conference in Glasgow, Scotland.

Here is a video of his multitudinous expressions of "I" and "me:"

Obama set the tone early on in his speech, when he used the word “I’ about once every fourteenth word.

“I am a private citizen now so trips like this feel a little bit different than they used to,” Obama said. “I don’t get invited to the big group photo. Traffic is a thing again. Music doesn’t play when I walk into the room. On the positive side, I can give a speech like this without wearing a tie and not create a scandal back home. I hope. But even though I’m not required to attend summits like this anymore, old habits die hard.”