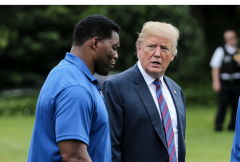 Herschel Walker and President Donald Trump at the White House, May 30, 2018. (Photo by Olvier Contreras-Pool/Getty Images)

College Football Hall of Fame running back Herschel Walker sent out a tweet on July 22 remarking on the difference between Russia, China and North Korea and the United States of America.

“If you go to Russia, China, or North Korea, and decided you wanted to change their flag, anthem, and way of life…You’d probably be locked up and never seen again,” said Walker.

“But you can some to the USA & have your freedom of speech, so don’t change us into them,” he said.