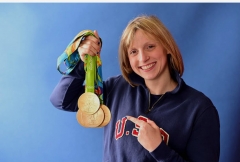 American swimmer Katie Ledecky, who has won ten Olympic medals, including seven gold medals. was interviewed in 2016 by the National Catholic Register.

One of the questions the Register asked her was this: “Has your faith changed during these last four years, as you’ve transformed from an Olympic first-timer to one of the world’s most dominant athletes?”

Ledecky responded: “I think the beauty of Catholicism is its consistency through both successes and difficulties. I’ve counted on my faith to give me strength through both training and competition—but also in school, with my family and everyday life. So while my goals in the pool have changed, my faith remains something that’s consistent and something I can always rely on.”

Ledecky, who is now 24-years old, has competed as a swimmer in the last three Olympics, winning a total of 10 medals, including 7 gold medals.