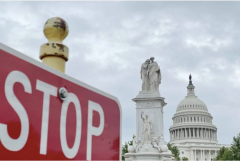 Record low temperatures are hitting the Washington, D.C. area this Memorial Day weekend, according to the National Weather Service.

On Saturday, according to NWS, the Baltimore Washington International Airport recorded a record-low daily “high” temperature of 56 degrees. The previous record had been 57 degrees. BWI is located south of Baltimore, Md., and about 32 miles north of the U.S. Capitol building.

Additionally, the NWS is predicting that BWI, Reagan Washington National Airport in Virginia, and Dulles Airport, which is also in Virginia, will all experience record low temperatures today. Reagan National is located directly across the Potomac River from D.C. Dulles is located about 28 miles west of the Lincoln Memorial.

At Reagan, the previous record low for May 30 was 57 degrees in 1915. The NWS is now predicting that the high at Reagan today will only be 56 degrees.

At BWI, the previous record low for May 30 was 58 degrees in 1915. The NWS is now predicting that the high at BWI today will also be 55 degrees.

At Dulles, the previous record low for May 30 was 62 in 1971. The NWS is now predicting that the high at Dulles today will also be 55 degrees.

The normal high temperature for Washington, D.C. on May 30, according to the NWS, is 79 degrees. The normal low is 61 degrees. The record high for this day was 98 degrees, which occurred in 1991.