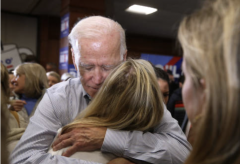 The San Luis Obispo Tribune published an exclusive story on Thursday reporting that the former husband of former Joe Biden staffer Tara Reade had filed a court document in 1996 that, as the Tribune put it, “shows…Reade told her ex-husband she was sexually harassed while working for Joe Biden in 1993.”

The Tribune story includes a photographic reproduction of one paragraph from the document--filed in the San Luis Obispo Superior Court--that says in part: “On several occasions Petitioner related a problem that she was having at work regarding sexual harassment, in U.S. Senator Joe Biden’s office.”

“A court document from 1996 shows former Senate staffer Tara Reade told her ex-husband she was sexually harassed while working for Joe Biden in 1993.

“The declaration—exclusively obtained by The Tribune in San Luis Obispo, California—does not say Biden committed the harassment nor does it mention Reade’s more recent allegations of sexual assault.

“Reade’s then-husband Theodore Dronen wrote the court declaration. Dronen at the time was contesting a restraining order Reade filed against him days after he filed for divorce, Superior Court records show."

In it he says: “I was sympathetic to her needs when she asked me for help, and assisted her financially, and allowed her to stay at my apartment with my roommate while she looked for work.”

“It was obvious,” says the filing, “that this event had a very traumatic effect on Petitioner, and that she is still sensitive and effected by it today.”

The Tribune reports that Dronen filed this document in response to one that Reader herself had filed.

“Dronen filed the record in response to a similar declaration written by Reade in support of her restraining order request, in which Reade described incidents of abuse throughout her life. In interviews with The Tribune and other media, Reade has identified herself as a domestic violence survivor and victim’s advocate.

“Though the ex-husband disputed many statements Reade made in her declaration, he wrote at the time that the alleged incident in Biden’s office and others described in the document ‘color (Reade’s) perception and judgment’ of her civil case."

Biden’s presidential campaign did not give the Tribune a comment on the filing. But it did give the paper a statement from, Ted Kaufman, the man who was Biden’s chief of staff at the time Tara Reade worked there.”

Kaufman’s statement said: “I have consistently said what is the truth here—that she never came to me. I do not remember her, and had she come to me in any of these circumstances, I would remember her. But I do not, because she did not.”