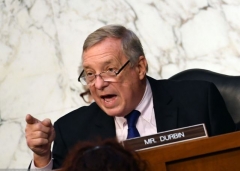 Sen. Dick Durbin (D.-Ill.), the third-ranking Democrat on the Senate Judiciary Committee, sent out a tweet on Tuesday attacking the idea that the Constitution should be deemed to mean what those who wrote and ratified it meant it to mean.

“Originalism is the MAGA of judicial philosophies,” said Durbin.

“We cannot allow an 18th century understanding of the Constitution to dictate what happens in 21st century America,” he said.

The Bill of Rights—the first ten amendments to the Constitution, which were ratified in 1791—starts by saying: “Congress shall make no law respecting an establishment of religion, or prohibiting the free exercise thereof; or abridging the freedom of speech, or of the press; or the right of the people to freely assemble; and to petition the Government for a redress of grievances.”

It also says: “the right of the people to keep and bear arms shall not be infringed.”

It also says: “The right of the people to be secure in their persons, houses, papers, and effects, against unreasonable searches and seizures shall not be violated.”

And: “nor shall any person…be deprived of life, liberty or property, without due process of law; nor shall private property be taken for public use without just compensation.”