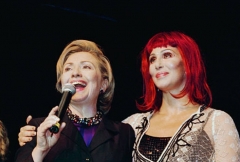 Singer Cher sent out a tweet on Sunday that was apparently a response to the Texas abortion law that bans abortions of babies that have beating hearts by saying in all capital letters: “WOMEN WILL DIE FROM BACK ALLEY ABORTIONS, SAME SA BEFORE ROE V WADE.”

In her full tweet, Cher cited racism, cultism and fascism.

She also pointed to what she called “trumpism”—which was, in fact, the only word in her tweet that she did not capitalize.

“BAREFOOT & PREGNAN, WOMEN AT THE MERCE OF TRYANTS!!” Cher said.

“WOMEN WILL DIE FROM BACK ALLEY ABORTIONS, SAME SA BEFORE ROE V WADE!!” she continued.

“POOR WOMEN WILL BE HIT THE HARDEST!!” she said.