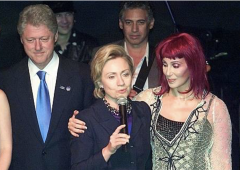 Singer Cher sent out a tweet on Wednesday urging people not to be distracted by anything President Donald Trump did or said that day and said that he was responsible for the deaths of 100,000 Americans.

“Don’t B distracted by anything trump Says or Does. 2 day,” Cher tweeted.

“Because OF HIS MEGALOMANIACAL MISHANDLING OF COVER-19. 2 DAY HE POWER-SLAMMED TWITTER,BATHED IN THE LIGHT OF ILON MUSK.&CONTINUED TO KILL,” she said.

The tweet included a video image of a grim reaper holding a scythe.