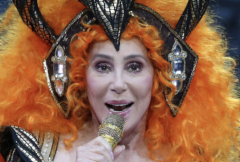 (CNSNews.com) - Singer Cher sent out a tweet on Sunday referring to people she called “Trump’s NEO-NAZIS.”

“THERE’S NOTHING HE WONT DO.LIE BECAUSE PPL DIDN’T SHOW,” she said.

“HE [images of hearts] RALLIES,” she said.