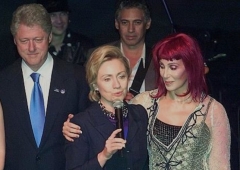 Singer Cher sent out a tweet on Monday saying that former President Donald Trump is a tyrant and misanthrope and warns Americans about what she thinks will happen if Republicans win control of the House and Senate in the 2022 midterm elections.

“ONSLAUGHT ON NATION’S CAPITAL WILL SEEM LIKE DAY AT THE BEACH, COMPARED 2 WHAT WILL BEFALL AMERICA,&MINORITIES, I trump & Republicans SEIZE POWER AGAIN,” she said.