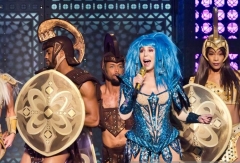 Singer Cher put out a tweet last week the forwarded a story about a clock on a building in New York City that is allegedly counting down the time until “the climate crisis irreversibly alters the planet” and said that President Donald Trump does not give a flying “FK ABOUT CLIMATE CHANGE” because he believed that money and Russian President Vladimir Putin “WILL PROTECT HIM.”

“This ‘Climate Clock’ is Counting Down Until the Planet is Irreversibly Damages—NowThis,” said Cher.

“HE THINKS [image of a sack of with a $ over it] POWER & PUTIN WILL PROTECT HIM,” said Cher.