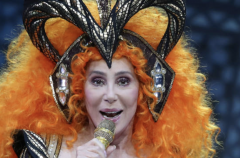 Singer Cher retweeted a cartoon on Memorial Day that showed an obese image of President Donald Trump golfing in a cemetery.

“NERO [fiddled] WHILE ROME [burned],” Cher said in her tweet—using images of a fiddle and a fire instead of spelling out the words.

She completed her tweet: “WHY ISN’T trump TALKING ABOUT HOMELES VETS APARTMENTS,OR BETHESDA…”