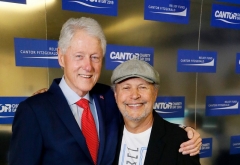 “This is what authoritarianism looks like: Trump not conceding after losing,” says the Sanders tweet that Crystal retweeted.