Biden’s State of the Union Malapropism on Putin: ‘He Met With a Mall’ 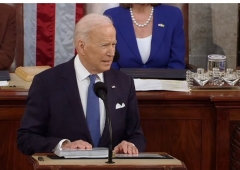 President Joe Biden used a malapropism in his State of the Union Address when speaking about Russian President Vladimir Putin’s invasion of Ukraine.

Biden meant to say: He met with a wall of strength.

Here is a transcript of what Biden said in the part of this State of the Union where he spoke about Putin and a “mall:”

“Six days ago, Russia's Vladimir Putin sought to shake the very foundations of the free world, thinking he could make it bend to his menacing ways. But he badly miscalculated. He thought he could roll into Ukraine and the world would roll over. Instead, he met with a mall—a wall of strength he never anticipated or imagined. He met Ukrainian people."