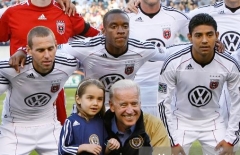 Vice President Biden and his grand daughter before a game betwee the DC United and the Philadelphia Union, April 10, 2010. (Photo by Brian Garfinkel/Icon SMI/Icon Sports Media via Getty Images)

Former Vice President Joe Biden is promising that on his first day as president he will order schools to let biological males, who consider themselves female, to have “access to sports, bathrooms, and locker rooms in accordance with their gender identity.”

Biden makes the promise on a page of his campaign website that is entitled: “The Biden Plan to Advance LGBTQ+ Equality in America and Around the World.”

“As President, Biden will: Ensure young LGBTQ+ people are supported and protected in our schools and college campuses by: Guaranteeing transgender students have access to facilities based on their gender identity,” says the page.

“On his first day in office, Biden will reinstate the Obama-Biden guidance revoked by the Trump-Pence Administration, which will restore transgender students’ access to sports, bathrooms, and locker rooms in accordance with their gender identity,” says this Biden campaign website page.

“He will direct his Department of Education to vigorously enforce and investigate violations of transgender students’ civil rights,” it says.

Below is a screen capture of a segment of the page on Joe Biden's campaign website that is entitled "The Biden Plan to Advance LGBT+ Equality in America and Around the World:"