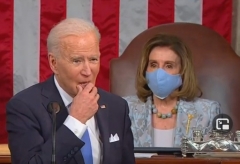 When a masked President Joe Biden entered the chamber of the U.S. House of Representatives on Wednesday to deliver his address to a limited number of senators and congressmen—as the video below shows--he fist-pumped the bare knuckles of at least eight people.

Then he patted Chief Justice John Roberts on the arm.

As he then gave his speech—with Vice President Kamala Harris and Speaker Nancy Pelosi conspicuously wearing masks behind him--Biden repeatedly put his hand to his face.

On the way out of the chamber, he had skin-to-skin contact with multiple members—including one who held his fist in her hand and another who shook his hand.

He did this at an event where many members of Congress were denied entry into the chamber in order to avoid the risk of spreading COVID-19.

ABC News reported: “Under normal circumstances, 1,600 people are in the chamber, and the hallways after the speech are packed. This year, just 200 people will be in the chamber.” It also noted: “House members also have to provide proof of vaccinations or negative Covid-19 tests to attend.”