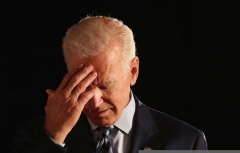 Former Vice President Joe Biden sent out a tweet on Tuesday saying that the “American people are…always full of hope’ and immediately followed it with a tweet that said our “planet cannot take four more years of Donald Trump.”

“The American people are tough, resilient, and always full of hope,” Biden said in the first tweet.

“There’s not a single thing we can’t do if we do it together,” he said.

This tweet was linked to a story from CBS News about a record temperature in the Arctic. The CBS News article said: