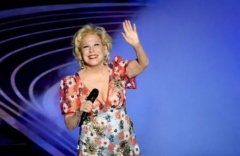 Singer Bette Midler sent out a series of tweets on Wednesday in which she said she had come to the conclusion that President Donald Trump’s “attack on peaceful protestors in D.C.’s Lafayette Square marks the end of his presidency.”

“With the benefit of 24-hours’ hindsight, it appears that Trump’s attack on peaceful protestors in D.C.’s Lafayette Square marks the end of his presidency,” Milder tweeted.

“He may continue to occupy the Oval Office,” she said, “but his tenuous claim to legitimacy as president evaporated with the first volleys of tear gas lobbed at Americans exercising their First Amendment rights.

“Trump believes his illegal use of force was a victory because it generated advertising for his 2020 campaign,” she said.

“In reality, Trump has made a grave miscalculation that will force him to play defense for the remainder of his term,” Midler continues. “If he remains in Washington, he will be a political prisoner in ta White House surrounded by protests.”

“If he flees to Mar-a-Lago to escape daily protests, he will be revealed for the coward he is,” she said.