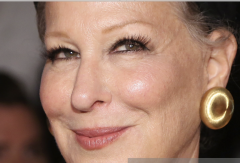 Singer Bette Midler sent out a tweet on Friday morning that was directed at President Donald Trump and that told the president Midler believes he is “a cancer on our country and Constitution.”

“Donnie, we have watched helplessly for YEARS, as you’ve degraded honorable people, smeared them, viciously and constantly ripping their sacrifice to our country to shreds, ruining countless lives in the process,” Midler said.

“You are a cancer on our country and Constitution,” Midler said.