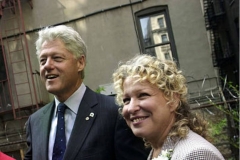 “#The UglyPresident is having his next rally on Juneteenth near where the Tulsa Massacre occurred, when mobs of white residents attacked black residents and businesses of the Greenwood District in Tulsa, Oklahoma, in 1921,” Midler said in her first tweet.

“It has been called ‘the single worst incident of racial violence in American history,” she said, continuing into a second tweet.

As USA Today explained it in a report published Friday:

“The president sparked outrage after he revealed he would return to the campaign trail for his first rally in more than three months in Tulsa and on June 19th.

“In 1921, a white mob in Tulsa attacked a predominantly black neighborhood killing hundreds of people, most of them African-American, one of the most notorious acts of racial violence in U.S. history. . June 19, or Juneteenth, is also known as Emancipation Day and commemorates the date in 1865 when Maj. Gen. Gordon Granger traveled to Galveston, Texas, to inform residents that President Abraham Lincoln had freed the slaves and that slave owners had to comply with the Emancipation Proclamation.

“Despite Trump denying the significance of Tulsa, he's never held a rally there and Oklahoma is a firmly red state he won by 36 percentage points in the 2016 election.”

In her series of tweets, Midler continued: “The attack, carried out on the ground and from private aircraft, destroyed more than 35 square blocks of the district—at that time the wealthiest black community in the United States, known as the ‘Black Wall Street.’

“Good luck to attendees, of Ugly’s rallies,” Midler continued, “because is a little cough spread Covid-19, imagine what happens when you blow a racist dogwhistle that hard.

“‘Transition to greatness?’” Midler said in another tweet. “Like the last four weeks’ greatness? If that’s great, I’d hate to see ‘Not so great.’

“He’s not just stupid himself,” Midler said, “he’s the cause of stupidity in others.”