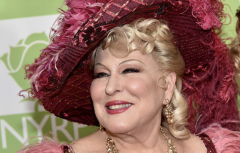 Singer Bette Midler sent out a tweet late on Monday saying that President Donald Trump is “in a tear-the-country-down rage” and has, among other things, “made it O.K. to bully and fat-shame.”

“A wounded bear is a dangerous thing,” Midler said.

“Detested & defeated, Donald Trump is now in a tear-the-country-down rag,” she said. “Day after day, he rips at the last remaining threads of decency holding this nation together.

“He’s made America vile,” she said.

“He’s got angel-voiced children yelling ‘bitch,’ and flipping the bird at rallies,” she said. “He’s got young athletes chanting ‘build a wall’ at Latino kids on the other side.

“He’s made it O.K. to bully and fat-shame,” she said. “He’s normalized perversion, bragging about how an aging man with his sense of entitlement can walk in on naked women.

“But those who take pleasure in watching Donald Trump destroy the Republican Party are missing the bigger picture,” Midler said. “He’s trying to destroy the country, as well.

“Civility, always a tenuous thing, cannot be quickly restored in a society that has learned to hate in public, at full throttle,” she said.