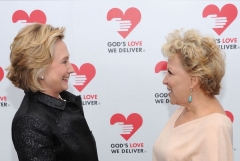 Singer Bette Midler sent out a tweet on Wednesday, which she has pinned to the top of her Twitter feed, stating that President Donald Trump is—among other things—the most “corrupt person to ever occupy the Oval Office.”

“The Republicans have fallen in line lock step behind a man who is the most dishonest, dangerous, meanspirited [sic], divisive, corrupt person to ever occupy the Oval Office,” Midler said.

Earlier on Wednesday, Midler had retweeted a tweet by Joe Biden—with some advice for the former vice president.

Biden said in his tweet: “Last night reinforced why I got into this race. We are in a battle for the soul of this nation—and it’s a battle we must win.”

Midler said in her retweet of Biden’s tweet: “I told you to kick him in the nuts! That would shut him up, because that’s close to where his voice comes from. Honestly, that was deeply, profoundly horrible, and we deserve better. Don’t do another one unless there is a kill button on the mics.”