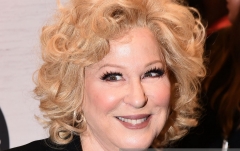 Singer Bette Midler sent out a tweet on Wednesday afternoon saying that President Donald Trump’s reelection campaign is “planning to steal the election.”

She said this was “accordion got our own intelligence agencies.”

“DonTrumpJr spreads misinformation and flat out lies with no evidence and no one refuting his lies,” Midler said in her tweet.

“The Trump campaign is planning to steal the election, probably with the help of foreign actors, according to our own intelligence agencies,” Midler said.