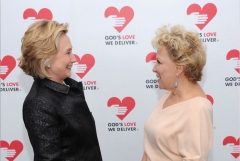 (CNSNews.com) - Singer Bette Midler sent out a tweet today telling President Donald Trump that you “tear us down” and “shame us” and saying that America is now in a “battle for its soul…against fascism.”

“You have taught us, Mr. Trump, to expect the worst of you,” Midler said. “You have met our expectations.

“Right now, our nation is engaged in a battle for its soul, a battle, and this is the crucial part, a battle against fascism,” Midler said.

“You tear us down,” she continued.

“We will be silent no longer,” she concluded.