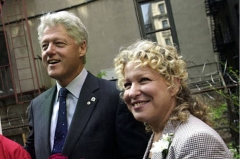 “We don’t give him enough credit for making the rest of the Republican party look compassionate,” she said.

“This guy is so homophobic he refuses to blow his own nose,” Midler said.