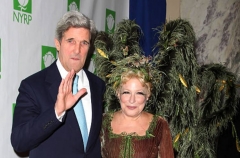 (CNSNews.com) - Singer Bette Midler sent out a tweet on Sunday about the late Fred Trump, who was the father of President Donald Trump.

“During the 1940s, the US manufactured 3 million condoms a day for soldiers in WW2, but sadly none ever found their way to Fred Trump’s d***,” Midler said.

“But wasn’t this great #ObamaDay?” she continued.

“I thoroughly enjoyed reminiscing about a real president!” she said.

“Obama Day,” according to a report in Variety, was a celebration of former President Barack Obama that his fans conducted on Twitter on June 14--which also happens to be President Donald Trump's birthday.