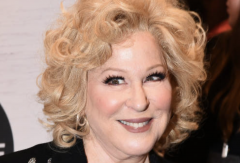 Singer Bette Midler sent out a series of tweets on Tuesday night, when First Lady Melania Trump was speaking to the Republican National Convention from the White House Rose Garden.

“Get that illegal alien off the stage!” Midler said in one tweet.

“Why are they promoting this awful person, #melania?” Midler says in another. “Was it in her contract?

“She says it feels like just yesterday they were at their first convention. Maybe to you, Mel,” said Midler. “For the rest of us every day has been a horrible slog thru the 9th Circle of Hell.”

In a follow-up tweet this morning, Midler retweeted that last tweet, claiming the First Lady “can’t speak English.” She was unapologetic.

“Why not?” she said. “Just giving them a taste of their own immigrant bashing medicine. I guess they're not keen."