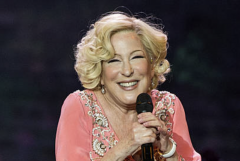 Singer Bette Midler sent out a tweet late on Wednesday asking whether police departments were “magnets for sadists the way the church was a magnet for pedophiles.”

Midler’s tweet forwarded a tweet by Miami Herald investigative reporter Julie K Brown which showed side-by-side photos of 49ers quarterback Colin Kaepernick kneeling on the sidelines during the national anthem and the Minneapolis police officer kneeling on the neck of George Floyd, who died after repeatedly telling the policeman he could not breathe.

“For all those who didn’t get it the first time, the second time, the 20th time…this is not a political issue—it’s a civil rights and human rights issue,” Brown wrote in her tweet.

“Are Police Departments magnets for sadists the way the church was a magnet for pedophiles??” Midler asked in her tweet forwarding Brown’s.

On Tuesday, Midler had sent out a tweet that said: “I don’t know why all US police departments don’t tell the cops that a knee on the neck is not to be used in subduing a suspect. EVER. There, right in front of them, was the example of #EricGarner. Why wasn’t this treatment ended then? #MinneapolisPolice."