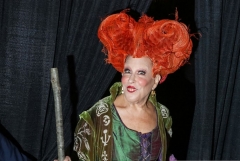 Singer Bette Midler sent out a tweet on Tuesday presenting her general analysis of the intellectual skills of the American people.

“The hardest part for #Americans to face is that they have been brainwashed for 50 years,” Midler said.

“They don’t know how to actually think, to reason, to weigh the pros & cons, to decipher who is trying to screw them & who has their best interests, (believe it or not) at hear.”