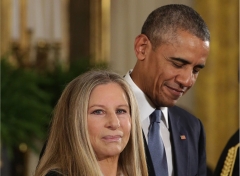 (CNSNews.com) - Singer Barbra Streisand sent out a couple of tweets on Thursday pointing to what she believes to be President Donald Trump’s habitual untruthfulness.

“When Trump was first elected, I wrote a song called ‘Don’t Lie to Me’ because he had then lied about 4,000 times,” Streisand said in one tweet.

“If only he understood the power of the truth, we might not have lost over 250,000 lives,” said Streisand.

In another tweet, Streisand said: “The massive lawlessness of the Trump Administration deserves a thorough investigation. Otherwise the next would be autocrat will take it as license to ignore the rule of law too.”