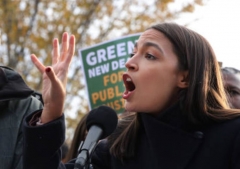 Rep. Alexandria Ocasio-Cortez (D.-N.Y.) told CNN in an interview on Friday that during what she said was an encounter with a Republican congressman who called her “a f*cking b*tch” on the steps of the Capitol earlier this week, another Republican congressman “literally started hollering about throwing urine.”

Rep. Ted Yoho (R.-Fla.) is the congressmen Ocasio-Cortez said in a speech on the House floor on Thursday (CSPAN video below) called her “a f*cking b*tch.” Rep. Roger Williams (R.-Texas), who she says was walking with Yoho, is the congressman she now says “literally started hollering about throwing urine.”

“In the interview,” CNN reported, “Ocasio-Cortez added more detail about Yoho's broadside before he reportedly called her a ‘f*cking b*tch’ within an earshot of a reporter from The Hill newspaper. Ocasio-Cortez was walking up the east front steps of the Capitol to cast a vote Monday afternoon when both Yoho and Texas GOP Rep. Roger Williams approached her as they were walking down the steps.”

CNN reported what Ocasio-Cortez said about what Williams said as follows:

CNN reported Williams response to what Ocasio-Cortez said as follows:

“On Friday, Williams refused to talk about Ocasio-Cortez's claim that he was involved in bullying her. He said ‘no’ when asked if he heard Yoho call her "disgusting." And he would not discuss the incident further or the allegations from the New York Democrat.

“‘We put a statement on it right after it happened,’ Williams told CNN. ‘I'm not going to talk about any of it.’