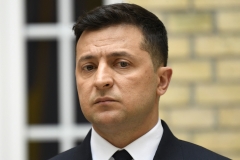 In a statement to the press this morning, Ukrainian President Volodymyr Zelensky denounced Russia's invasion of Ukraine and said that the government was handing out weapons to any person who is able and willing to fight to defend Ukraine.

"We are already handing out weapons and will hand them out to defend our country to everyone who wants and has the capacity to defend our sovereignty," said Zelensky, as reported by The Guardian and numerous other media.

"The future of Ukraine depends on every citizen," he added.

Russia launched its sweeping invasion of Ukraine shortly after midnight on Feb. 24.

According to public reports, Russia has an estimated 280,000 army soldiers in an around Ukraine, which has about 125,000 troops. In terms of military reserves, Russia has about two million -- Ukraine, 900,000.

In an earlier statement to the media today, Zelensky said, "What can Ukrainians do? Help the national defense. Join the ranks of the Armed Forces of Ukraine and territorial defense units. Any citizen with combat experience will now be useful."

People gather for a Stand With Ukraine Rally in Times Square on February 24, 2022 in New York City. (Getty Images)

"It is up to you and all of us whether the enemy will be able to advance further into the territory of our independent state," he said. "Please help the volunteer community and the medical system, for example by donating blood."

In closing, he said, "If you, dear European leaders, dear world leaders, leaders of the free world, do not help us today, then tomorrow the war will knock on your door. Glory to the Armed Forces of Ukraine! Glory to Ukraine!"