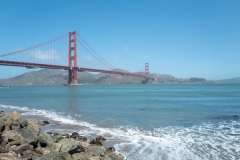 The group of 300 to 400 worshippers was led by Sean Feucht, a worship leader at Bethel and the founder of Hold the Line, which hosted the protest.

According to Feucht’s website, Hold the Line is a “political activist movement” with the goals of engaging “with the church and with millennials in a way that charges them to become more politically active.”

“We were protesting with worship,” Feutch said. “Nobody was angry. We were just like, ‘we want to worship. We want to declare a blessing over the state of California.’ When they persecute and discriminate, we bless.”
“We want to release hope, and we want to unify the sound of the church,” Feucht added.

The guidelines released by Newsom stated that “activities such as singing and chanting negate the risk-reduction achieved through six feet of social distancing.”

California’s Department of Health added, "Practices and performances present an increased likelihood for transmission of Covid-19 through contaminated exhaled droplets and should occur through alternative methods like internet streaming.”

Singing was deemed one of the “practices and performances” that increased the chance of the spread of coronavirus. Therefore, it was banned. “The act of singing, itself,” the state health department continued, “might have contributed to transmission through emission of aerosols, which is affected by loudness of vocalization.”

The order also stated that churches and other houses of worship must “discontinue singing and chanting and activities and limit indoor attendance to 25% of building capacity or a maximum of 100 attendees, whichever is lower.

California Pastor Jim Clark, senior pastor of Crossroads Community Church, voiced his dissent. “I said enough’s enough. We will be singing and praising the Lord…we don’t chant, but if we did chant, we’d be chanting too.”

When Newsom’s ban was first announced, Feucht posted a video on Twitter with the caption, “What a tyrannical move and drastic overreach of government into our religious liberties. LET US WORSHIP!!!!!!”

Feucht’s protest on the Golden Gate Bridge lasted for over two hours with the group praying over the police officers that were present.

According to Fox News, the police officers that were there said that they had never witnessed a protest like that with its prayer and worship.

Following the group’s protest, Sen. Josh Hawley (R-Mo.) tweeted his support of the group. “This is awesome. California has banned singing in churches, but not at protests! So these believers took their singing outdoors for the most powerful protest there is - heartfelt worship. #LetUsWorship”

The American Center for Law and Justice, a firm meant to protect religious liberties, says it plans on suing the state for the order against singing, saying, “We can’t stand by and watch as California strips its believers of their God-given right to raise their voices in worship and praise.”