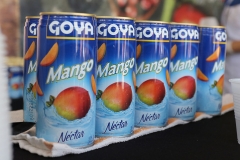 Casey Harper, a 27-year-old from Arlington, Va., has raised over $200,000 to buy and donate Goya Foods, a Hispanic food brand that was being boycotted due to their CEO saying the United States was “blessed to have a leader like Donald Trump,” The Hill reports.

Goya Foods is based in New Jersey and is the largest Hispanic-owned business in the country. During the COVID-19 pandemic, the business donated over two million pounds of food to those in need.

Castro, former Housing and Urban Development Secretary for the Obama administration, told his Twitter followers to “think twice before buying their products.”

Harper decided he was tired of the cancel culture and people cancelling those with whom they disagree. Harper set up a GoFundMe page in hopes of supporting Goya and the less fortunate.

The GoFundMe page says, “Buy GOYA- Support Trump and feed the hungry” followed by “What if we rise up and say no to cancel culture AND feed the hungry at the same time?”

As of the writing of this article, Harper’s fundraiser has raised $223,579 with donations from over 6,000 individuals.

Harper’s goal was to raise $10,000 to buy Goya products and donate them to homeless shelters and food banks. His goal has been blown out of the water as donations poured in by the thousands.

Many supporters of the GoFundMe left messages of support.

“Great idea Casey Harper,” one person said. “The silent majority is ready to put a hard stop to the liberal nonsense.”
“ALL LIVES MATTER!!!” another commented.

Another voiced his disgust for Occasio-Cortez, saying, “I’m tired of AOC and her cronies telling people what they should like or dislike.”

Harper didn’t seem to be surprised with the success of the fundraiser. "People are seeing in the news a double standard for one political view. Americans are fundamentally generous people. … I'm not surprised we have raised so much because people are tired of having to walk on eggshells in political discourse,” Harper told Fox Business.

"In a time where speaking your mind can cost you your job, or get you facing legal action because the corporate elite fear the mob just as much as anyone, the most important issue is to speak boldly at the risk of your own well-being,” Harper said. “If enough people do that, lovers of free speech and limited government will win."

Unanue said that the boycott on Goya was a “suppression of speech” and that it showed the “division that exists today in our country.” He went on to say the division was killing the country.

Goya has also received support from many through Twitter.

Charlie Kirk tweeted, “Goya is donating over one MILLION pounds of food to America’s food banks, serving mostly minority communities, and Democrats are calling for a boycott on them why? Because the CEO called Donald Trump a “leader.” You can’t make this up.”

He also said, “Imagine boycotting one of America’s largest minority-owned businesses and thinking that you’re doing something to end racism. That’s the current mindset of the leaders of the Democrat party.”

Meghan McCain also voiced her support for Goya. “It seems weird and callous to boycott a company who supplies food to the masses and employs 4,000 people during a pandemic. No matter what your politics, who wants more people out of work? Almost every CEO, boss, & person I interact with and consume products who disagrees with me.”