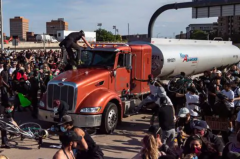 A recent poll revealed that 79% of truck drivers that responded said they would not deliver products to cities that defund or disband their police departments.

In the CDL Life poll, a news organization aimed specifically at truckers, the group asked truck drivers, “Would you pick up/deliver to cities with defunded or disbanded police departments? Why or why not?”

Seventy-nine percent of 1,283 respondents said they would not pick up/deliver in cities that had disbanded or defunded their police departments.

In explaining their view, some truckers told CDL Life,

“…if something was to happen and you have to take matters into your own hands, and then you risk being prosecuted for protecting yourself.”

“This is not an area you need to act fearless and think you you’d look like a fool for saying no…Imagine what kind of fool you look like for driving into a hot spot and putting your life in danger.”

“I will not deliver to an area with a disbanded police department. My life matters and I do this for my family. We are already at the mercy of these towns and cities with laws and hate against us for parking, getting a meal or even using a restroom.”

“Simple,” said another driver, “We may not like it all the time, but laws and order is necessary.”

Minneapolis has already taken steps to disband its police force. Lisa Bender, the city council president, showed her support for the measure when she said, “It is clear that our system of policing is not keeping our communities safe. Our efforts at incremental reform have failed, period”

CDL Life’s poll goes on to say that three out of four truckers would be concerned for their safety if the cities they were delivering to had defunded or disbanded police departments.

According to the U.S. Bureau of Labor Statistics, 966 truckers were killed on the job last year. This makes truck driving one of the most dangerous jobs in the United States.

The current riots have made their jobs even more hazardous. Some truck drivers have been attacked, had their trucks looted, or had bricks and other objects hurled at their trucks as they attempted to drive through crowds of protesters blocking the streets.

According to Freight Broker Live, Swift reportedly sent a message to its drivers urging them to be safe and saying, “if you somehow are stopped by a crowd, stay in the truck and keep moving slowly. Call 911 for help. You have every right to assume people assaulting you in your vehicle present a danger."

For the survey, the poll question was posted on the CDLLife App. "As of June 13, 2020, we’ve had over 1,283 respondents and 79% say they will refuse loads to cities with disbanded or defunded police departments," said CDL Life.

According to its website, "CDL Life exists to celebrate the commercial truck driver by providing news, information and entertainment, as well as an escape from the everyday grind. We want to call attention to challenges that drivers face both on and off the road and provide a forum for respectful discussion about issues in the trucking industry today."