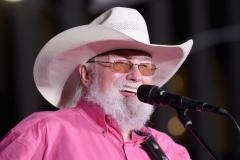 (CNS News)—Music legend and patriot Charlie Daniels passed away on Monday from a hemorrhagic stroke at the age of 83.

Daniels’ representatives released a statement following his death that said, “Few artists have left a more indelible mark on America's musical landscape than Charlie Daniels. An outspoken patriot, beloved mentor, and a true road warrior, Daniels parlayed his passion for music into a multi-platinum career and a platform to support the military, underprivileged children, and others in need.”

Daniels was known worldwide for his country music, and especially for his skill on the guitar and fiddle. He also played the banjo and mandolin.

He perhaps was best known for his 1979 hit “The Devil Went Down to Georgia.” The year the song came out, it was No. 1 on the country charts and No. 3 on the pop charts. It was also named Single of the Year.

The awards and accolades didn’t stop there. Daniels is a member of the Country Music Hall of Fame, Grand Ole Opry and Musicians Hall of Fame. He was also the recipient of a Dove award and Grammy award for his music.

When asked about being a member of the Grand Ole Opry, Daniels said, “To be able to be a member and to have my name linked with my heroes is some pretty heady stuff for a guy that loves music and loves the Grand Ole Opry as much as I do.”

Daniels said that in the early days of his music career, he worked a day job to pay the bills and then played gigs six nights a week. To Daniels, the long, hard days were worth it.

“I was doing what I wanted to do, you know, I wanted to be a professional musician more than anything else in the world, and ever since I learned three chords on the guitar that’s all I cared about was playin’ music,” Daniels said.

The hard work certainly paid off. Daniels’ music took him all over the United States and the world. He also traveled and played for troops deployed in the Middle East. He is remembered fondly for his love of God, family, music and his country. He was also passionately pro-life, cared deeply for veterans and was an advocate of the Second Amendment.

When his death became public, many paid tribute to the music legend.

"The world knew Charlie Daniels as a wizard with a fiery fiddle. A legendary musician. A true American icon. But, to his NRA family, Charlie was all that and a lot more. We knew and loved Charlie as an outspoken patriot whose passion for freedom was unparalleled. Charlie didn’t just preach about values—he lived them every day,” said the National Rifle Association (NRA) in a statement.

“A proud NRA Life Member and lifelong Second Amendment supporter who performed at countless NRA events, and courageously spoke out for freedom every chance he got,” said NRA Executive Vice President and CEO Wayne LaPierre.  “The world lost one of its brightest stars. Our country grieves for a true patriot. Our NRA family mourns the loss of a brother. Rest in Peace, Charlie.”

Country singer Travis Tritt expressed his gratitude to Daniels on his Instagram. “My heart is crushed today after hearing that my dear friend Charlie Daniels has passed away. Charlie was the first legendary artist to take me under his wing and encourage me when I was first getting started in the business. He was always there for me when I needed him. I have so many great memories of touring, performing, writing and recording with Charlie, but my favorite memories are of simply talking with the man when it was just the two of us alone,” Tritt said.

Donald Trump Jr. also tweeted about Daniels. “So sorry to hear we lost American legend Charlie Daniels to a stroke today,” the tweet read. “A true patriot in every sense of the word. Actually went back and forth with him this weekend. His last words to me were, ‘Thank you and FOUR MORE YEARS!!’ We will miss you my friend. #RIPCharlieDaniels”

The Bar D Wranglers, a country band located in Durango, Colorado also had a special connection to Daniels. He often played with the band when he found himself in Colorado, saying, “There’s nothing like an evening at the Bar D.”

Band member and flat-picking champion Gary Cook released a statement for the band saying, “Charlie and Hazel are part-time residents of Southwest Colorado. We have been blessed to call them friends. From visiting in our living room, recording messages and songs in the recording studio, and having the opportunity to play on stage with the incredible Charlie Daniels Band, the memories will last a lifetime. Charlie Daniels was larger than life on stage and an incredibly genuine person every day.  He was always so willing to share his time and make you feel like you were an important part of his life.

“Whether on a snowmobile trail in southwest Colorado or in front of thousands of dedicated screaming fans, Charlie was always a great example of how to love and care for your fellow man and how to be the best entertainer.

“In our last conversation, he gave me wise counsel and condolences as we talked of the passing of our hero Cy Scarborough. The caring words he shared with me will be something I'll never forget.  My family sends our love and support to Hazel, Charlie Jr., the CDB members, and all those who he loved and counted as friends. Rest In Peace Charlie Daniels, well done sir.”

Luke Bryan tweeted, “Just learning of the passing of this great man. What a hero. A true patriot, Christian, and country music icon. Prayers to his family. Thank you for all your contributions on and off the stage. God bless you Charlie Daniels.”

Representative Lee Zedlin (R-N.Y.) tweeted, “RIP Charlie Daniels. The man was a patriot through and through. To his core, he loved our country, our freedoms, our military, our veterans and first responders. It was an honor to spend some time with him along the way. He had as much heart as anyone I have ever met.”

Singer Parker McCollum tweeted his condolences as well. “RIP Charlie Daniels… wow… what an absolute legend. Got to see him play at the Opry one time and sat on the stage right behind him. Won’t ever forget it! 2020 has got to go!”

In a 2017 interview with CNS News, Daniels said, “I tell people now when I leave Tennessee I want to go to heaven. It’s the only other place I want to live more than Tennessee.”

He is survived by his wife, Hazel and son, Charlie Daniels Jr.