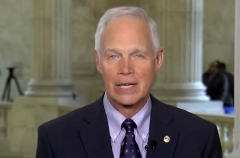 “What really concerns me is, all the policies that moderate Joe Biden is enacting, no Radical Joe Biden, is weakening America: the spending spree, the massive trillion dollars of deficits that he’s already pushed and proposed.’

“And, of course, the Nord Stream 2 pipeline: waving the sanctions on that will put enormous geo-political pressure on Ukraine and other European nations and really put Vladimir Putin in the driver’s seat, from that standpoint.

"So, all the actions he’s taken weakens America, strengthens our enemies, and puts our nation at risk."