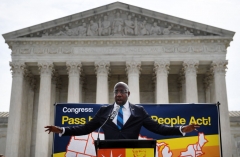 Senator Reverend Raphael Warnock (D-GA) speaks at a rally in front of the US Supreme Court to call on the Senate to pass the For the People Act, on June 9, 2021, in Washington DC. (Photo by OLIVIER DOULIERY/AFP via Getty Images)

A poll by the Honest Elections Project (HEP) shows only 28 percent of people who are informed about HR 1, the “For the People Act,” actually support it.

“Only 29% of voters know anything at all about this expansive legislative attempt to reshape American elections, but when they are informed, only 28% support its passage,” the Honest Elections Project said in a memo to members of Congress and state legislators.

“Liberal activists and politicians reflexively attack any policy they disagree with—voter ID laws and ballot trafficking bans, for instance—as ‘voter suppression,’ and have created a misleading narrative that frames these policies as unpopular, unnecessary, and discriminatory,” but the data shows that “both Black and Hispanic voters favor them (for Black voters, 64% vs. 22%; for Hispanic voters, 78% vs. 16%),” HEP said.

“Similarly, 64% of Black voters, 77% of Hispanics, and 76% of low-income voters reject the notion that showing an ID is a ‘burden,’ despite frequent claims from the left,” it added.

Most voters (64%) want voting to be safeguarded, and they “view voter ID laws and other anti-fraud prophylactics as necessary parts of a credible and legitimate voting system. Voting must be accessible, but it also must be secure.” According to the poll, only 21% supported taking away the safeguarding procedures to make voting easier.

Among voters who support absentee ballots, “most actually favor absentee voter ID, including young (18- 24, 64%) and senior voters (56%), Black (58%) and Hispanic (68%) voters, and low-income voters (62%). Moreover, 72% of voters say it would be easy to comply with an ID law that requires absentee voters to provide their driver’s license or partial Social Security number.”

The poll revealed that only 7% of voters want to maintain and back absentee ballots without safeguarding them, and only 11% think that vote trafficking should be legal. For the majority of voters, they “want credible elections that balance access and security.”

The poll was conducted March 4-10 among 1,200 registered voters selected at random.