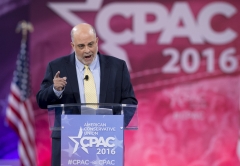 Conservative radio host Mark Levin challenged media outlets to prove that COVID-19 came from animals during Thursday's “The Mark Levin Show." Levin says “there is no evidence whatsoever” to prove this origin theory.

"That is propaganda from the communist Chinese, regurgitated by elements of our own government; they call them experts -- a cover-up by one of the organizations that received the grant in New York and which in turn passed through money to the lab in Wuhan," he stated.

Below is a transcript of this segment of "The Mark Levin Show":

Mark Levin: And the gentleman that I interviewed is not a right-winger, not a left winger, not an any-winger, but he has a real pedigree when it comes to science. He was the senior editor for the science pages of the New York Times. And he agreed it was shocking how incurious the media were. And he stated emphatically, that after a year of researching this subject, there's not a single sliver of evidence that this coronavirus was from animals of any kind, that there was a jump from bats or other animals to human beings -- not any evidence whatsoever.

And then they say, ”well where’s your evidence that it came from a lab?” Well, let’s see. The lab actually did a whole lot of research on making the coronaviruses -- multiple coronaviruses -- lethal to human beings. The lab did not use a Category Four safety protocol, used a Category Two, next to the lowest, the same kind of category you see in a dentist's office.

And of course, The Wall Street Journal has since reported that three of the staffers working at that lab got sick. Scientists have disappeared. Gee, I wonder why that is? The communist Chinese won’t let anybody anywhere near the data. Now we have something called “circumstantial;" this Is more than “circumstantial evidence!" I would bet this house that this came from the lab because there's no evidence that it came from animals to humans. That is propaganda from the communist Chinese, regurgitated by elements of our own government; they call them experts -- a cover-up by one of the organizations that received the grant in New York and which in turn passed through money to the lab in Wuhan. It just so happens the Wuhan lab, where this virus broke out, is creating these viruses.

Now this is way too complicated for the New York Times and the Washington Post, way too complicated for the conga line of stooges and frauds over there at CNN and MSNBC, way, way over the head of our great news networks and the "Today" show and "Good Morning America" and whatever the crap shows called on CBS. “Oh! You must be a conspiracy theorist, a denier.” This is the modern media today.