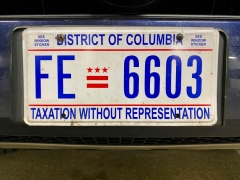 A DC license plate is displayed in Washington, DC on June 26, 2020. - Democratic leaders will vote later during the day on a DC statehood bill in the House of Representatives. (Photo by DANIEL SLIM/AFP via Getty Images)

The House passed a statehood bill (H.R.51), which seeks to admit the District of Columbia as the 51 state of the United States of America, but it appears the bill faces opposition in the GOP-controlled Senate, and the president has indicated he would veto it if it reaches his desk.

Last year, Senate Majority Leader Mitch McConnell (R-Ky.) referred to the Democratic-led statehood movement as “full-bore socialism,” adding that “none of that stuff is going anywhere.”

McConnell also referred to efforts like expanding the Supreme Court, the Green New Deal, and Medicare for all, as evidence of the Democrat’s radical socialist agenda.

Voters are split on the issue with 52 percent in support of D.C. statehood and 48 percent against according to a Hill-HarrisX poll.

Residents of Washington, D.C., pay federal taxes but have no voting representation in Congress.

Washington, D.C.’s non-voting representative and sponsor of the bill, Del. Eleanor Holmes Norton, said the bill has “both the facts and Constitution on its side.”

Article 1, Section 8 of the Constitution lays out 10 square miles of land given by cession of particular states to become the seat of government of the United States. Federalist No. 43 explains that the federal government needs control over its seat of business so as not to be beholden to a particular state government.

Republican opponents of the bill believe that it is a move to grab power by Democrats. Washington D.C. is a historically blue area that has voted for the Democratic presidential candidate in every election since it received three electoral votes with the adoption of the 23rd Amendment.

Sen. Tom Cotton (R-Ark.) criticized local D.C. leadership for prioritizing statehood while there is “mob violence” in the streets.

The White House has already announced they would use veto powers if the bill were to make it to the president’s desk.