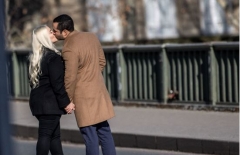 Twenty-year-old Francesco Barducci was fined by Italian authorities in the Tuscan town of Forte dei Marmi for allegedly kissing his girlfriend in public, which is a violation of the health restrictions imposed to stop the spread of the coronavirus, according to a report from Breitbart News.

Current rules in Italy say that a couple walking together outside must be several feet apart, unless they are wearing masks.  Italian Senator Matteo Salvini has offered to pay the fine, if the charge is not dropped.

According to the news story, Barducci said, “We had secluded ourselves to avoid the crowd, and since there was no one around, I wanted to kiss my girlfriend. My friend, who was smoking, immortalized the moment with a photo.”

“They gave us a fine,” he added. “I’m unemployed because I worked part-time and I’ve been laid off. With the new [lockdown measures], department stores are closed. They fined me 400 euros.”

Mateo Salvini, who is a populist Italian senator, in an interview with the young man and himself on a television program Quarta Repubblica, stated that he would pay the fine for the young man if the mayor of Forte dei Marmi did not lift the fine.

“If the mayor doesn’t lift the fine, we will take care of it,” said Salvini.

Salvini added that he offered to pay the fine because he thought the situation was “surreal,” being penalized by the state for kissing your girlfriend.

As reported in the Italian newspaper, Il Giornale, Salvini said, “This does not mean that the fines of half of Italy write to me tomorrow and send me the report, but it is such a linear behavior and it is a penalty that appears so surreal that the municipality intervenes, as I hope it will, we will take care of it."