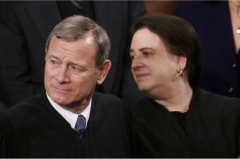 (CNSNews.com) - The Supreme Court issued a 5-4 ruling on Wednesday imposing an injunction on an order issued by Democratic Gov. Andrew Cuomo of New York that limited the people who could enter a church or a synagogue—but not a liquor store—in areas of the state that he declared “orange” or “red zones” because of the COVID-19 panedmic.

The Roman Catholic Diocese of Brooklyn and the Agudath Israel of America had filed suit against Cuomo arguing that he was violating their First Amendment right to the free exercise of religion.

The Supreme Court voted 5-4 to issue an injunction preventing enforcement of Cuomo’s order while the case is being litigated.

The applications to the court from the Brooklyn Diocese and Agudath Israel of America, the per curiam opinion said, “seek relief from an Executive Order issued by the Governor of New York that imposes very severe restrictions on attendance at religious services in areas classified as ‘red’ or ‘orange’ zones.

“In red zones,” said the court, “no more than 10 persons may attend each religious service, and in orange zones, attendance is capped at 25.”

“Citing a variety of remarks made by the Governor, Agudath Israel argues that the Governor specifically targeted the Orthodox Jewish community and gerrymandered the boundaries of the red and orange zones to ensure that heavily Orthodox areas were included,” said the court. “Both the Diocese and Agudath Israel maintain that the regulations treat houses of worship much more harshly than comparable facilities.”

“And they tell us without contradiction,” said the court, “that they have complied with all public health guidance, have implemented additional precautionary measures, and have operated at 25% and 33% capacity for months without a single outbreak.”

The court pointed out how Cuomo was treating churches and synagogues differently than nonreligious places.

“In a red one, while a synagogue or church may not admit more than 10 persons, business categorized as ‘essential’ may admit as many people as they wish,” said the court.

“And the list of ‘essential’ business includes things such as acupuncture facilities, camp grounds, garages, as well as many whose services are not limited to those that can be regarded as essential, such as all plants manufacturing chemicals and microelectronics and all transportation facilities,” said the court.

“The disparate treatment is even more striking in an orange zone,” said the court. “While attendance at houses of worship is limited to 25 persons, even non-essential business may decide for themselves how many persons to admit.”

“It is hard to believe,” the court said, “that admitting more than 10 people to a 1,000-seat church or 400-seat synagogue would create a more serious health risk than the many other activities that the State allows.”

“The restrictions at issue here, by effectively barring many from attending religious services, strike at the very heart of the First Amendment’s guarantee of religious liberty,” said the court.

In his own opinion, Gorsuch was sharply critical of Cuomo.

“The only explanation for treating religious places differently seems to be a judgment that what happens there just isn’t as ‘essential’ as what happens in secular spaces,” Gorsuch wrote.

“Indeed,” said Gorsuch, “the Governor is remarkably frank about this: In his judgment laundry and liquor, travel and tools, are all ‘essential’ while traditional religious exercises are not.

“That is exactly the kind of discrimination the First Amendment forbids,” said Gorsuch.

Chief Justice Roberts argued against he injunction because he said that Cuomo is not enforcing his order at this precise moment.

“Numerical capacity limits of 10 and 25 people, depending on the applicable zone, do seem unduly restrictive,” Robert conceded. “And it may well be that such restrictions violate the Free Exercise Clause. It is not necessary, however, for us to rule on that serious and difficult question at this time. The Governor might reinstate the restrictions. But he also might not.”