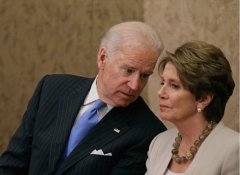 (CNSNews.com) - The federal government set new records for taxing and spending through the first nine months of fiscal 2021 (October through June), according to the Monthly Treasury Statement.

When the historical October-through-June tax revenues are adjusted for inflation into June 2021 dollars (using the Bureau of Labor Statistics inflation calculator), the second-highest-ever tax revenues for the first nine months of a fiscal year came in fiscal 2015. That year the federal government collected $2,785,886,470,000 (in constant June 2021 dollars) in the October-through-June period.

When the October-through-June spending numbers are adjusted into June 2021 dollars, the second-highest spending during that period came in fiscal 2020, when the Treasury spent $5,274,180,280,000 (in constant June 2021 dollars).

Table 9 of the Monthly Treasury Statement, which lists tax receipts by source and expenditures by function, lists the largest spending category so far in this fiscal year as “income security.” The federal government has laid out $1,364,613,000,000 for this function in the October-through-June period.